Pests are just one of the many different kinds of bugs that can irritate your life. Rats, termites, cockroaches, fleas, and ticks are just a few examples of pests that can be found in homes or yards. All these little creatures carry diseases and infections that can be transferred to humans if they come into contact with them.

The most common way for this transfer to happen is through touch – so being aware of what you’re touching is important! Pests also have an impact on our moods. They often lead us to feel frustrated or angry because we know how much work it takes to get rid of them once they’ve infested a space. At the same time though, when people see pest control professionals working hard to help them feel better about their homes, it can improve their mood.

It’s a tricky thing – we know that pests aren’t good but at the same time, people often enjoy talking to pest control professionals as they’re usually very friendly and eager to help. The average person is completely unaware of how important the connection between mood and health can be. If a person is stressed or unhappy, it can lead to being sick – so having a pest infestation isn’t just annoying – it also affects your physical well-being!

Pests can affect your mood

Pests can affect your mood. The mere sight of a bug, spider, or rodent can make you jumpy and afraid. You may be anxious when going to bed because you know pests are in the mattress or under the sheets waiting for an opportunity to attack. And if they don’t strike at night, they’ll probably do it in the morning when you’re getting ready for work, school or playtime with your kids.

Research shows that people who have been exposed to certain kinds of insects have higher levels of anxiety than those who haven’t been exposed to them before. In one study, women were shown pictures of cockroaches and spiders while hooked up to a machine that measured their heart rate and blood pressure. Those images triggered more of an emotional response than the images of other frightening objects, like snakes and needles.

People who live in mold-infested houses also suffer from health problems like fatigue, respiratory infections, skin rashes, and mood changes (like irritability). These symptoms are likely not due to mold directly but rather through secondary effects such as poor indoor air quality or rodents that might be attracted to the moisture. But no doubt living in a moldy environment can affect your mood negatively. In these two cases above, both cockroaches and spiders have been shown to have clear negative impacts on mental health. In particular, they cause anxiety which can lead to further issues as well as impact your life happiness.

Pests can cause allergic reactions and asthma

Pests can cause allergic reactions and asthma. They are a nuisance to have in your home or business, but they can also be dangerous. Pests are most often found outdoors, but some are known to infest indoors as well.

There is no way of knowing how long pests may have been living there before you notice them, so it’s important to check regularly for any signs of an infestation: live bugs or insects; droppings; shed skins; smells from the pests themselves and their larvae (young) such as musty odors and ammonia-like smells; the damage done by pests such as chewed up leaves on plants, webs spun across doorways or windowsills, holes in plaster walls where roaches might be living, or where ants might be bringing in materials to build their nests; and nesting areas.

Locating pests is only the beginning. If you detect any indications of infestation, it’s vital to take action right away. Attempting to handle the problem yourself unless you’re confident there are just one species of bug involved can be dangerous. Insects breed at varying speeds, so if you have several types competing for food, nesting space, and source of nutrients, keeping an infestation under control may be considerably more difficult.

Pests can carry diseases like the flu, measles, and malaria. Some pests are vectors of disease that humans cannot contract themselves and therefore require a vector to be infected (like mosquitoes). Pests also cause allergies and asthma. Pest control in Cedar City, UT is one method to prevent these difficulties from happening in your house or workplace.

Professionals use traps, sprays, powders, and other methods to get rid of any pests that return for months so they don’t return! Trying to protect your house and workplace from these diseases can be a daunting task. It’s important because it could make you sick, even if you don’t typically suffer from asthma or allergies.

These pests also carry viruses like measles and malaria, which can be very serious for adults and children alike. The good news is that many pest controls in Cedar City provide lifetime guarantees against any return infestation of mosquitoes and other potential vectors of disease like flies, roaches, raccoons, mice, and rats! Making sure these bugs stay outside not only protects yourself but others too!

Keeping pests away is important for your health and safety 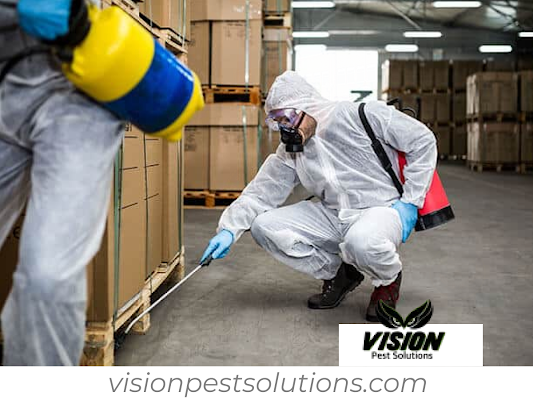 Pests are a major concern for many people. We know that they can do damage to homes, vehicles, food supplies, and more. They are also carriers of diseases that can have serious effects on human health. The problem is getting worse in recent years because the types of pests are changing too – there’s no shortage of bed bugs or rodents now! It’s important to be proactive when it comes to pest control.  Pesticides alone aren’t enough – you need an integrated approach for complete protection. And one thing is clear: preventing pests from entering your home should start before they ever get close enough to infest it! Pests often enter our homes through small cracks in the foundation or gaps around doors and windows so sealing these openings with a high-quality silicone or caulk is a crucial first line of defense. Pests that do get into your home should be dealt with as soon as possible before they reproduce and spread their numbers further.  Regular pest control services can help keep the population count low, which will eventually lead to infestation prevention. According to research conducted by Orkin, 31% of Americans have already had an experience with bedbugs and 58% know someone who has been affected by them. If not treated quickly and efficiently, these tiny insects can thrive and cause many sleepless nights for homeowners unlucky enough to catch an infestation.

There are many ways to keep pests away including using pesticides

There are many ways to keep pests away including using pesticides. Pesticides are chemicals that kill or control the growth of insects, fungi, weeds, and other organisms harmful to cultivated plants or crops. For instance, some common household bug killers are insecticides that kill bugs by poisoning them with substances such as arsenic-based compounds or organophosphates.

Some pest control companies use a spray called pyrethrum made from an extract of chrysanthemum flowers; this is very effective against house flies and mosquitoes because it paralyzes their nervous system in seconds without harming humans at all. The downside is that the effects only last for about 24 hours before they need reapplication so you may need more than one treatment per day when there’s a really bad infestation. This is just one example of pesticides but I think it’s safe to say that most use pesticides as pest control methods.